The evening festivities kicked off with a poignant conversation on artist to artist support within the local community– we approached this conversation from a perspective of abundance i.e. how are we currently supporting each other, what sort of resource do we posses right now that could be use to support the artist next to us etc. There were a number of relative ideas and thoughts shared in the circle, but what stood out to me most is when Willy ARQ (our featured performing artist) shared his story of trial, transition and triumph, then summing up both his experiences (as a former refugee seeking community from a war torn country), and the very essence of our conversation for the evening, with a simple African Proverb that reads– “I am because we are…”

After being reminded of that proverb, I began to muse and ponder the thoughts below:

Do we really live in a society in which the notion expressed in the above proverb, is seemingly becoming evermore but a dream. A dream of a world that’s been long lost to the illusion of time. A world that I hear the elders speak of with both joy and longing— when people came together regularly, with no agenda, no program, no talking points, no institutions, no incentives. Just love and longing. A love for life and a longing to be free. And not just “free” in the sociopolitical sense of the word, but simply free— free to feel, free to live, free to be human. Where did those days and nights go? I question the yonder generations, asking them did such a thing really exist, and if it did, why and where did it go?

Observing the room at the first five Soul Food Connects, on the surface you can see a room full of people— calculating, comparing and contrasting their prejudice and preconceived notions on what to expect at the gathering, to the current reality. You can sense that their notions are being challenged— yet they’re still uncertain, they’re still sitting closed off to themselves and/or with the clique they arrived with. Then the group conversation begins with an ice-breaker, that leads into reluctant and humbled self-introductions; after awhile the introductions morphs into group conversation. As the conversation progresses, if you’re ever so present, and if you listen at just the right moment, you will start hearing the opening of the gates and the lowering of the walls of social skepticism and seclusion. Then in that moment, something soulfully magical happens. People begin to connect with the shared interests, ideas and struggles that are being expressed— and before long the circle grows bigger in size, yet closer in connection. The same group of individuals who at first seemed out of place are now engaging and influencing the flow of the conversation — with a group of incomplete strangers, so much so that I had to interject to inform them that the soul food (provided by Soul Fusion) is ready to be enjoyed. After food is served, if you were to come in around that time — it would seem like a high-school reunion of sorts, you would see young, beautiful souls eating, laughing and vibing along side both people they’ve never met before that moment and even friends that they haven’t seen since high-school — all to a setting of good music, vibrant paintings, lifted energy and a safe space (Inverted Arts). Then we invite them to express themselves on the open mic, it was at this point on the night of Saturday, September 16, 2017 I realized that now, more than ever before, the soul of humanity is crying out for the space to be free. Free to feel and be felt, free to listen and be heard, free to live, free to make soulful connections with kindred spirits. I guess in so many ways Soul Food Connect is what it is because WE ARE in need of Food for the Soul. We face a peculiar set challenges in a world that’s more technically connected than spiritually connected, however I do believe in the power of community, and the love and freedom that has been expressed over the past year via Soul Food Connect.

This journey has been a major blessing and I’m excited to see what’s next! 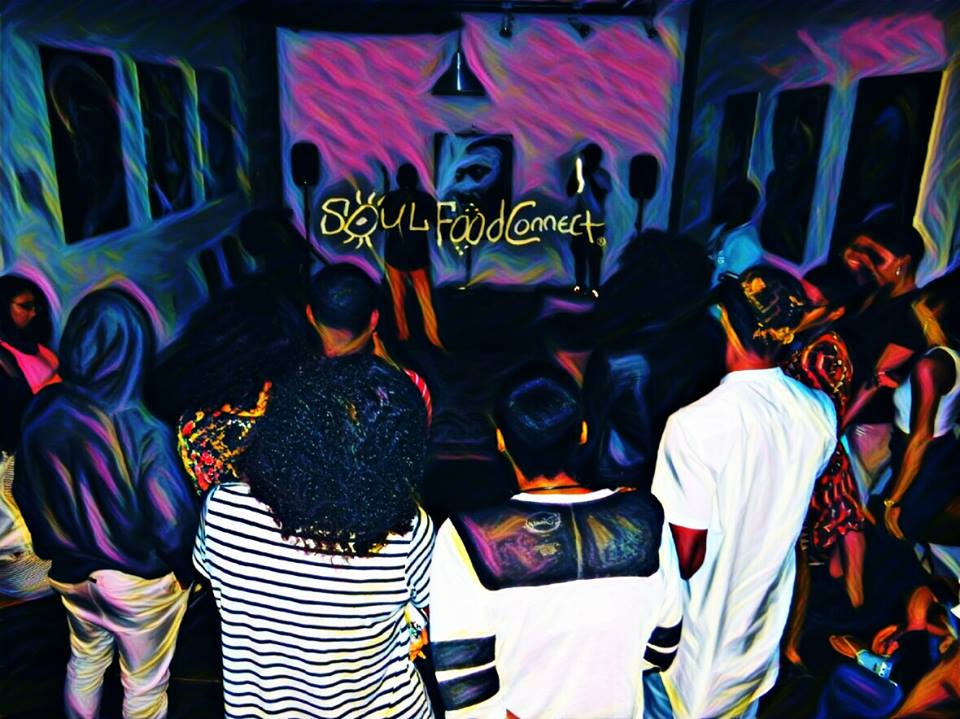